A common nocturnal moth that can be found from April right through to October as it is multi-brooded.

Click/tap any photo to see the full image 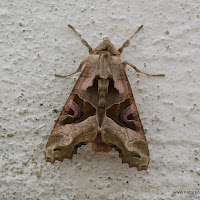 Phlogophora meticulosa: the angle shades moth - Despite dramatic falls in the population levels of moths they are still very common insects. Most are nocturnal and most are masters of camouflage and so one does not see them often in the day time. The striking pattern of this one, called the angle shades (Phlogophora meticulosa) actually means that it is very hard to see when it is at rest during daylight hours on fences and leaves. However, this newly hatched one in pristine condition obviously missed the point of its wonderful camouflage colouring and thought it would show everyone who stopped to look just how gorgeous it is! Fortunately, it chose our bungalow to do this on and so my nature loving wife tenderly moved it to a more secure location.
The angle shades is one of our most common moths and can be found from April right through to October as it is multi-brooded. Common may be but hard to find once they learn the technique of disguise.