Click/tap any photo to see the full image 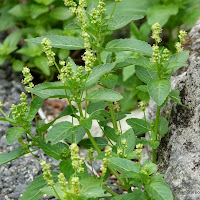 Annual Mercury: the garden mercury - One of the things I enjoy most about writing my nature notes is the challenge of finding something interesting to say about every species I feature and I hope, in time, to feature every species of animal and plant I have found in Dorset. Today's flower, part of the "Weeds of Cultivation" series, has certainly been a challenge. There is really not much one can say about annual mercury (Mercurialis annua)!
It is a fairly nondescript flower to look at, it grows on nutrient rich soils in arable fields, gardens and waste ground in mid to late summer and is also known as garden mercury. Being a rather plain, unattractive plant it be can easily be easily overlooked. However, whilst common in south east England it does not appear to be so elsewhere in Britain and so, in Dorset, it is right on the edge of its range and so is quite uncommon. I used to find it a lot in Hampshire but since moving to Dorset I have seen it, to date, just once.
It is closely related to the woodland flower, dog's mercury, which is known to be poisonous. I have not found any reference that annual mercury is as well but I suspect it is but I have no intention no testing it out!